Two committees of the Florida Legislature have scheduled hearings for Tuesday to review possible decoupling for pari-mutuels, along with a proposed new Seminole Gaming Compact and other gaming issues.

The hearings will be held by the Senate Regulated Industries and the House Regulatory Affairs Committee, which have initial jurisdiction over gaming issues.

According to reports in Tallahassee, that House Committee on Monday will introduce a bill that would  allow greyhound tracks and possibly some other pari-mutuels to decouple live events from other gaming.  The bill reportedly would not allow decoupling by thoroughbred tracks.

Decoupled pari-mutuels would be able to stop holding live races and jai-alai games while still having other gaming such as poker, in-bound simulcasts and slot machines.

Decoupling is a divisive topic within the state’s thoroughbred industry.

Calder Casino & Race Course wants it. So does Hialeah Park, which now has quarter horse racing, and so do most of Florida’s 15 greyhound tracks. Their main argument in seeking decoupling is that they would give up events that have become unprofitable while shifting money to other gaming and to possible upgrades of infrastructure or redevelopment of land now used for racing.

Gulfstream Park and Tampa Bay Downs are not seeking to decouple and stop live racing.

The Florida Horsemen’s Benevolent and Protective Association and the Florida Thoroughbred Breeders’ and Owners’ Association are opposed to decoupling.

They maintain that decoupled pari-mutuels would have unfair advantages in competing for gaming dollars with thoroughbred tracks, leading to spillover economic impact on Florida’s racing and breeding industries. That is a main reason why the Florida HBPA is opposed to decoupling, even if it were only for greyhound tracks. 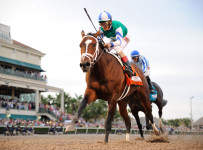