The Lambholm South Tampa Bay Derby, which carries a purse of $350,000, will be the centerpiece of the most lucrative card in track history. The annual Festival Day program will also include the Grade III, $200,000 Florida Oaks and the Grade III, $150,000 Hillsborough Stakes, both on the turf, and the $100,000 Challenger Stakes.

“We are based in Florida, we’re supporters of Florida racing and the Tampa Bay Derby is a high-profile sporting event,” said Lambholm South owner Roy Lerman. “It is a race I’ve enjoyed attending, and we like to support things close to home.

“The importance of the race continues to grow as the importance of the track as a winter racing center keeps increasing, and hopefully we can do this for many years in the future,” Lerman added. “A lot of horses that run in that race, whether they win or not, go on to great accomplishments later in the spring and summer.”

Lambholm South is a 1,830-acre Thoroughbred facility in Reddick, Fla., just outside Ocala, which offers clients a full range of services, from breaking and training young horses to sales prep and boarding. Established in 2000, it moved to its current location on the site of the former Hobeau Farm in 2005.

The Lambholm South operation has been the early training grounds for nine Eclipse Award champions and more than 50 Grade I stakes winners, the most recent being Colts Neck Stables’ 3-year-old colt Force the Pass, winner of the Belmont Derby Invitational on July 4.

Lambholm South’s involvement with the Tampa Bay Downs stakes program began in 2009, when the Marion County farm agreed to become the presenting sponsor of the track’s annual Festival Preview Day.

“We are delighted Lambholm South has agreed to sponsor our most important and best-known race, while continuing to sponsor Festival Preview Day and the Lambholm South Endeavour Stakes,” said Margo Flynn, Tampa Bay Downs’ Vice President of Marketing and Publicity. “Mr. Lerman and his team share our commitment to Thoroughbred racing, and their ongoing involvement is a major benefit to Tampa Bay Downs, our horsemen and our fans.”

In addition to his roles as Lambholm South owner and Thoroughbred breeder, Lerman is a successful on-track trainer, maintaining a stable at Tampa Bay Downs the past several years. Last season, he saddled his 4-year-old filly Evidently to win the Florida Cup Distaff Turf in stakes-record time of 1:40.93 for the mile-and-a-sixteenth distance.

Lerman said Evidently could be a candidate for the 2016 Lambholm South Endeavour Stakes.

The Lambholm South Tampa Bay Derby has been a stepping stone on the Triple Crown trail since its inception in 1981. It has twice produced winners of the Kentucky Derby Presented by Yum! Brands: in 2007, when Street Sense won both races, and 2010, when Super Saver finished third in the Tampa Bay Derby before capturing the Run for the Roses.

The first four finishers in the Lambholm South Tampa Bay Derby will earn “Road to the Kentucky Derby” qualifying points.

Lambholm South becomes the first title sponsor of the Tampa Bay Derby in 30 years. Budweiser sponsored the first six runnings of the event, from 1981-1986. 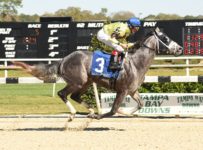