Saturday, Sept. 19 — Here’s some optimistic weather-related news for Gulfstream Park, its horsemen and its fans.

However, the afternoon forecast is for a 30 percent chance of thunderstorms in and around Hallandale Beach.

Gulfstream’s 11-race card begins at 1:15 p.m. and five races are scheduled for turf.

That includes the featured ninth race–the $75,000 Treasure Coast at five furlongs for 3-year-olds and up. Singanothersong is a likely favorite on turf or if rain forces a move to the main track. Successful Native would be a top threat on turf. Scheduled post is 5:47 p.m.

Rain in the mornings and during some races caused havoc with the race schedule on Thursday and Friday.

On Thursday all four races scheduled for turf were moved to the dirt track that was sloppy and sealed.

On Friday, Gulfstream had five races scheduled for turf. Only the first was ran on that surface. The fourth, sixth, eighth and tenth races were moved to the sloppy and sealed dirt track.

Garden Princess, the 6-5 favorite, came in third 6 ½ lengths behind Kinsley who is trained by Todd Pletcher.

Curlin’s Princess won in 1:37.17 on the sloppy and sealed track.

It was the second win in seven career starts for Curlin’s Princess, a Kentucky-bred daughter of Curlin. 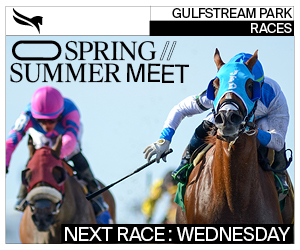