Fast and firm conditions and a nine race card start off the week’s racing action in Oldsmar. The first Post time is scheduled for 12:15 P.M.

Tampa Bay Downs has live racing every Wednesday, Friday, Saturday, and Sunday (except Easter), until closing day on May 7. 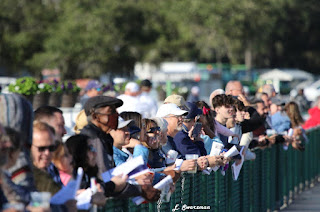 Today’s feature is RACE 5, Post time is scheduled for 2:18 PM. Live RadioStPete.com coverage, including the call from announcer Jason Beem, starts at 2:15.

A compact but competitive field of a half dozen older Fillies and Mares will go a grassy mile under $32,000 Optional Claiming conditions.

STOLEN HOLIDAY (4) is in a good spot for Hall of Fame trainer Shug McGaughey. This five year-old Mare, a daughter of WAR FRONT (DANZIG) was a winner in her debut at eight and one-half furlongs on the local lawn back on April, 29 2020.

Since then, she has raced five times with classier rivals on the NYRA circuit. She showed versatility  outsprinting a $92,000 NW1X field at Belmont last October 22. Half of her six career races (all turf) have been mile and one-sixteenth routes and the rest have been sprints. She has proved herself already, scoring running short and long, todays middle distance mile should be just right. Red hot rider Pablo Morales gets aboard for the first time. Pablo and Shug are 100% (2 for 2) in Tampa this season.