Monday, Tuesday and Thursday are dark days. The Downs has live racing every Wednesday, Friday, Saturday and Sunday (except Easter), until closing on May 7.

Today’s play is in RACE 8, Post time is 3:47. Live coverage on RadioStPete.com, including the call from announcer Jason Beem starts at 3:45.

A full field of older Fillies and Mares will sprint six furlongs under $8,000 NW3L conditions.

MS MALEVOLENCE (4) appears to have an edge on her rivals, dropping into $8,000 company for the first time. This could be the easiest competition she will meet in her career so far. She ran for a $16,000 claiming tag last race, now that price is cut in half. A sure sign of trainer intent. This five year-old Mare was claimed by the Douglas Nunn barn at Monmouth for $16,000 last August. She was then laid off until January 5, where she ran fifth at that claiming price. Journeyman Isaac Castillo rode her three times in Jersey last summer and returns in the irons today. Presently in Tampa, the Nunn-Castillo combo is winning at a 75% strike rate, 3 for 4. 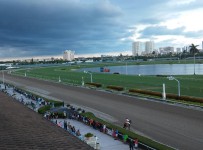