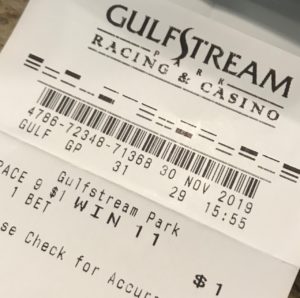 Wagering on the Rainbow 6 was $274,760, the second highest of this meet that started Dec. 3rd.
Gulfstream takes out 20% of the wager, then puts 24% in the carryover for the next race day. The remaining 56% is disributed to the winning ticket-holders.

Today’s feature is the 10th race: the H. Allen Jerkens Stakes at 2 miles on turf for 3 year-olds and up. Gulfstream races very few at the 2 mile distance, so it should be one to watch.

The race is named after hall of fame trainer who died in 2015 at age 85.
He was known as the Giant Killer, for major upsets in stakes races. Jerkens trained in 20,976 starts over his 34 year-racing career !

In 1973, several months after Secretariat swept the Triple Crown, Jerkins trained horses Onion and Prove Out.

Do have a safe and memorable Christmas and Holiday.
HorseRacing FLA Staff 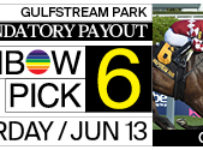