Gulfstream Park’s Saturday card has the  only two graded stakes  races of this year’s  spring/summer meet.

Saturday will be the fourth straight race day without turf racing, due to recent rains.  Of the remaining races the seventh, ninth and twelfth have been moved from turf to the dirt track which is listed as fast.

The Princess Rooney (Grade 2) is seven furlongs on dirt for fillies and mares 3-YO and up and is the eleventh race with scheduled post of 5:35 p.m.

We will have coverage later this afternoon. 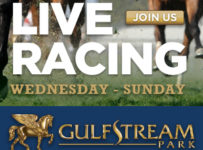