The post position draw will be held on Tuesday at 11:00 a.m. for Saturday’s  Belmont Stakes (Grade 1) at Belmont Park in Elmont, N.Y.

Belmont Park officials expect that nine horses will be entered for the 1 1/2 mile dirt stakes, which is the final race in the Triple Crown for 3-year-olds.

The list of likely entrants is headed by Rombauer, the winner of the Preakness Stakes (Grade 1) on May 15, and by Hot Rod Charlie and Essential Quality, the third and fourth place finishers respectively in the Kentucky Derby (Grade 1) on May 1.

The other likely entrants are  Rock Your World, France Go De Ina  and Rebel’s Romance.

The Belmont Stakes is scheduled as the 12th race on Saturday’s 14-race card. Scheduled post time is 6:49 p.m., and will be televised live on NBC’s over-the-air channels. Belmont Park will have seven other graded stakes races on Saturday.

Medina Spirit, the first place finisher in the Kentucky Derby, is not entered in the Belmont Stakes.

In a post Kentucky Derby blood  test, that Bob Baffert trainee tested positive for the steroid betamethasone which is not permitted in a horse’s bloodstream on a race day in Kentucky.

Following that failed drug test, the New York Racing Association barred Baffert from entering horses in races at Belmont and its other tracks.

Churchill Downs has said it if that test finds illegal medication, it will disqualify Medina Spirit and award the Kentucky Derby victory and winner’s share of the purse to  Mandaloun-the horse that crossed the finish line second in that race.

Medina Spirit finished third in the Preakness at Pimlico in Baltimore on May 15–following a series of special pre-race blood tests.

Mandaloun did  not run in the Preakness and will not race in the Belmont.

Of the likely Belmont starters, only Known Agenda has raced at Gulfstream Park or at Tampa Bay Downs.

Known Agenda, who has a come-from-behind style, won the Florida  Derby (Grade 1) at Gulfstream on March 27.

He finished ninth in the Kentucky Derby, following  a troubled trip from the unfavorable rail post position. He did not race in the Preakness.

Unbridled Honor was the only horse that raced in Florida and later raced in this year’s Preakness–where he finished sixth.

Research by HorseRacingFLA indicates that barring a strong Belmont Stakes showing, 2021 will be the worst year of this century for “Florida horses” in the Triple Crown races. 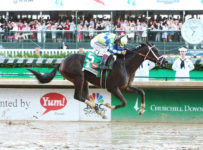 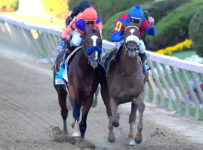 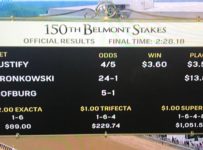