Gulfstream Park has a mandatory payout on its Rainbow 6 on Saturday, and it will start with a carryover of $464,803.

Gulfstream officials expect that the large carryover will enhance the “all of it must go” attraction and lead to wagering of at least $2 million on the  Rainbow 6.

Well prior to the start of the Rainbow 6, we will have a story that includes Gulfstream analyst Ron Nicoletti’s Rainbow 6 selections.

That story and most of our other reports on Gulfstream today will be  exclusively on our  blog which may be accessed on the menu bar at the top of the home page of this Web site.

Our coverage will include the $75,000 Not Surprising Stakes at one mile on turf for 3-YOs. It is the fourth race and not part of the Rainbow 6.

The day will start with the dirt listed as Fast and the turf listed as Good.

The second race has been moved from turf to dirt.

On Friday, Gulfstream  moved all four of its scheduled-for-turf races to the dirt track that was listed as Muddy–following several days of rain.

As of 11:30 a.m. Saturday, skies were were partly cloudy and no rain was falling at Gulfstream in Hallandale Beach, Fla.

The  Weather Channel forecast is for the chance of rain to increase from 15 percent to 40 percent during racing hours.

The Rainbow 6 jackpot is made up of the entire coming-in carryover plus 80 percent of the day’s new Rainbow 6 bets.

Gulfstream usually  pays out the jackpot only if there is just one ticket with all six winners in the Rainbow6. On Saturday, it will divide the jackpot payout among all tickets with the six winning horses.

On non-mandatory days when there is not just one ticket with all six winners, Gulfstream takes out 20 percent of the day’s Rainbow  6 bets. It then divides 56 percent among tickets with the most winners (usually six) and adds 24 percent to the carryover. 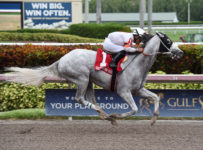