Gulfstream Park on Saturday had a mandatory payout on its Rainbow 6, and it paid $567.80 on the 20-cent only bet.

Gulfstream did not disclose the number of winning tickets (all six winning horses). HorseRacingFLA’s review of Equibase charts shows there were 4,742 winning tickets.

Four of the winners were favorites, and the highest odds winner was 6-1.  That was a main reason for the relatively low Rainbow 6 payout and the large number of winning tickets.

The Hallandale Beach, Fla., track will begin a new Rainbow 6 pool on Sunday.

First post will be 12:50 p.m. for a ten-race  card that has no stakes races. The Rainbow 6 will be on races five to ten with the sequence scheduled to start at 2:26 p.m. It is a 20 cents per combination-only bet.

Gulfstream is guaranteeing that the payout will be at least  $50,000 if there is just one ticket with all six winning horses. If Rainbow 6 betting is less than $50,000, Gulfstream will put in the difference.

The attraction was that in the mandatory payout Gulfstream returns and divides up the entire carryover plus 80 percent of the day’s new Rainbow 6 bet among all tickets with six winners.

On days without a mandatory payout, Gulfstream makes that jackpot payoff only if there is just one ticket with all six winning horses.

If there are multiple winning tickets on a non-mandatory day, Gulfstream takes out 20 percent of the bet and then divides 56 percent among tickets with the most winners (usually six) and adds 24 percent to the carryover. 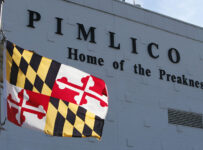