Home
Gulfstream
Javier Castellano and Irad Ortiz Jr., two of the standout jockeys of this era, shared the spotlight at Gulfstream Park on Wednesday.
Hall of Fame member Castellano (photo on home page) returned to riding  after sitting out for three months while rehabbing from surgery on his right leg.The five-time Gulfstream Championship Meet titlist had one mount. He rode Sexy Dream to a fourth place finish in the ninth race. He is scheduled in two races on Gulfstream’s ten-race Wednesday card.
Ortiz rode five winners on Wednesday. He is seeking his third straight Gulfstream championship meet riding title. That followed a four-victory day on Sunday.
He has ridden 93 winners through Wednesday, the 55th day of the 86-day  championship meet. Luis Saez is second with 70 wins.
Ortiz’s five winners on Wednesday, with $ 2  win prices and trainers were:
First Race — Cat Lady ($4.60), Fausto Gutierrez
Second Race — Jacohare ($13.80), Gregory Sacco
Fifth Race — American Matters ($7.60), Allen Iwinski
Sixth Race —  Dem a Wonder ($4.60), Rohan Crichton
Eighth Race — Subsidiary ($10.60), Jose Noda-Fernandez
Ortiz, a 28-year-old native of Puerto Rico, was voted the winner of the Eclipse Award as champion jockey for 2019 and 2020. He is the older brother of Jose Ortiz, who through Wednesday has 29 wins at the current Gulfstream meet and is tied for sixth place.
Castellano, a 43-year-old native of Puerto Rico, won a record five consecutive Championship Meet riding titles at Gulfstream from 2011-2012 through 2015-2016. During that time, he was voted the Eclipse Award as champion jockey four times, from 2013 through 2016.
“I’m every excited, very motivated,” Castellano said. “That was my first mount. We all are looking to win first time. It didn’t work out, but we’re looking at the big picture.”
He added: “We’re looking to get fit, riding a lot of horses. I’m looking to work hard. Hopefully, I’ll get a lot of support from the owners and trainers.”A winner of 5,328 races and more than $354 million in purse earnings, Castellano had arthroscopic surgery to clean up some debris in his right leg, near the hip, Nov. 16 in New York. He went through physical therapy and returned to Florida earlier this month to start getting on horses.Castellano is named on two horses Thursday – Todd Pletcher-trained Deemed Essential in Race 7, a maiden special weight on turf for 3-year-old fillies, and Graham Motion-trained All Come True in Race 10, a mile optional claiming allowance for older fillies and mares on turf.
Royal Delta on Saturday

Eres Tu and Mrs. Danvers are the likely favorites.

Eres Tu,  a 5-year-old daughter of Malibu Moon, won all three of her races last year for trainer Arnaud Delacour.  She is coming off a win in the Allaire DuPont Stakes (Grade 3) at 1 1/8 miles on dirt at Laurel Park on Dec. 27.

The Royal Delta would be the first race for Mrs. Danvers since Nov. 26. On that day, the Shug McGaughey trainee won by 6 1/4 lengths in the Comely Stakes (Grade 3) at 1 1/8 miles on dirt at Aqueduct.

The Royal Delta is the only stakes scheduled for Gulfstream over the upcoming weekend. 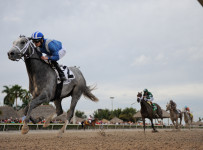