Heading into Wednesday’s races, Irad Ortiz Jr. and Luis Saez are in their accustomed one-two spots in the jockey standings in Gulfstream Park’s championship meet.

Ortiz leads with 88 wins and Saez is second with 70. Ortiz is seeking his third straight title in Gulfstream’s December through March meet.

Wednesday is the 55rh day of Gulfstream’s 86-day meet.

Paco Lopez is third with riding wins with 62, followed by Tyler Gaffalione with 58 and Emisael Jaramillo with 56.

Saffie Joseph Jr. is second with 35 wins and Mike Maker is third with 29.

Leinster and Mischevious Alex, both 2-5 favorites, were the winners in  Gulfstream’s two Grade 3 stakes on Saturday Feb. 13.

Leinster  caught High Crime in the final strides and  won by a neck in the $100,000 Gulfstream Park Turf Sprint at five furlongs for 4-YO  and up.

It was the first race for Leinster sincc last Nov. 7 when he finished third in the Breeders’  Cup Turf Sprint (Grade 1) at Keeneland.

Trainer George “Rusty” Arnold said he expects that Leinster’s next race will be either the El Quoz (Grade 1) on the Dubai World Cup undercard on March 28 or the Shakertown at Keeneland on April 3.

The field was reduced to four because of three scratches.

Mischevious Alex won in 1:09.55 on the track listed as Fast.

Trainer Saffie Joseph Jr. said he expects that Mischevious Alex will race next in the Golden Shaheen (Grade 1) in  Dubai or the Carter (Grade 1) at Aqueduct on April 3.

Gulfstream will draw entries on Wednesday afternoon for Saturday’s $100,000 Royal Delta (Grade 3) at 1 1/16 miles on dirt  for fillies and mares 3-YO and up.

Gulfstream officials expect that Eres Tu and Mrs. Danvers will be among the entrants.

Eres Tu,  a 5-year-old daughter of Malibu Moon, won all three of her races last year for trainer Arnaud Delacour.  She is coming off a win in the Allaire DuPont Stakes (Grade 3) at 1 1/8 miles on dirt at Laurel Park on Dec. 27.

The Royal Delta would be the first race for Mrs. Danvers since Nov. 26. On that day, the Shug McGaughey trainee won by 6 1/4 lengths in the Comely Stakes (Grade 3) at 1 1/8 miles on dirt at Aqueduct.

The Royal Delta is the only stakes race on Gulfstream’s Saturday Feb. 20 card.

Gulfstream will have nine graded stakes races on its Feb. 27 Fountain of Youth day card.

The Fountain of Youth is a second round points qualifying race for the Kentucky Derby. The first through fourth place finishers will receive 50, 20, 10 and five points respectively.

The Fountain of Youth will probably include Greatest Honour and Drain the Clock.

Also on Jan. 30, Drain the Clock won the seven-furlong Swale (Grade 3) at Gulfstream. The Fountain of Youth would be his first race longer than seven furlongs and first Kentucky Derby points race. 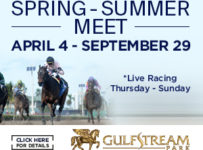