From Gulfstream Park, here is handicapping information for Saturday’s Rainbow 6–which will have a mandatory payout of the full jackpot regardless of the number of tickets with all six winners.

The carryover coming in will be $1,048,970.  Gulfstream officials anticipate that  $5 million or more will be bet on the Rainbow 6.

It is a 20 cent per combination-only bet. Multiple horses can be used in each race, thus producing multiple combinations.

For example, a ticket with two horses in each race has 64 combinations and costs $12.80.

This link is to a video with selections by Gulfstream analysts Acacia Courtney and Ron Nicoletti.

This link  https://www.equibase.com/static/entry/RaceCardIndexGP021321USA-EQB.html  to the Equibase Web site has the Gulfstream entries for Saturday. It has click-ons for handicapping material.  Some is free.  Some, including Past Performances, is at cost.

The Rainbow 6 sequence will span Races 7-12, kicked off by a mile maiden special weight race on turf that drew a full field of 3-year-olds, including Todd Pletcher-trained Golden Whim, a debuting son of Medaglia d’Oro who was a $1.5 million yearling purchase.

Well-bred colts trained by Chad Brown, Christophe Clement, Rusty Arnold and Kent Sweezey will also be making their respective debuts in a most challenging Race 7.

Pletcher-trained Black Magic Woman, a dominating 3 ¾-length maiden winner last time out, makes her return in Race 8, a mile optional claiming allowance for older fillies and mares. Dale Romans-trained Funnybet, who finished his 2020 campaign with three straight victories at Keeneland and Churchill Downs, is slated to make her 2021 debut.

Chad Brown-trained Structor figures to be tested by a group of battle-tested rivals in Race 10, a mile turf race for older horses. The 4-year-old son of Palace Malice has been idle since winning his third straight race in the 2019 Breeders’ Cup Juvenile Turf (G1) at Santa Anita.

Multiple graded-stakes winner Mischevious Alex will be a popular ‘single’ in Race 11, the $100,000 Gulfstream Park Sprint (G3), a six-furlong dash for 4-year-olds and up. The Saffie Joseph Jr.-trained son of Into Mischief is coming off an eye-catching optional claiming allowance win off a five-month layoff.

The Rainbow 6 sequence will be closed out with a mile maiden special weight race on turf for 3-year-old maidens in Race 12.  Bill Mott-trained Floriform, a son of Into Mischief who was beaten by just a half-length in his 2021 debut, figures to garner a lot of support from Rainbow 6 bettors in a race that includes several well-connected first-time starters.

The Rainbow 6 will be preceded by the $100,000 Gulfstream Park Turf Sprint (G3) in Race 6. Rusty Arnold-trained Leinster is slated to make his first start since finishing a close third in the Breeders’ Cup Turf Sprint (G1`) at Keeneland. The 6-year-old son of Majestic Warrior had won the Shakertown (G2) and Woodford (G2) in his two prior starts. 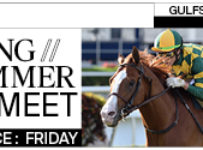