Each ticket with all six winning horses paid $4,130 on a 20 cent bet in the Rainbow 6 at Gulfstream Park on Wednesday.

There were 29 winning tickets, according to HorseRacingFLA’s review of Equibase charts.

On Thursday, Gulfstream will have a Rainbow 6 carryover of $134,151.  The 20 cents per combination-only bet will be on races five to ten, with the sequence scheduled to start at 3:10 p.m.

Gulfstream is guaranteeing that Thursday’s jackpot pool will be at least $400,000 if there is just one ticket  with all six winners.

The jackpot is made up of the entire coming in carryover and 80 percent of the day’s new Rainbow 6 bet. If Thursday’s total is less than $400,000 and there is just one winning ticket, Gulfstream will make up the difference.

Betting on the Rainbow  6 on Wednesday was $210,194. Per  its rules on days with multiple winning tickets, Gulfstream  took out 20 percent of the day’s Rainbow 6 bet. It then divided 56 percent among tickets with six winners and added 24 percent  to the carryover.

On Wednesday, four of the Rainbow 6 races were moved from turf to the dirt track that was listed as Fast on a day with clear skies. The surface shift followed heavy rain on Tuesday.

On Thursday, three races in the Rainbow 6 are scheduled for turf–the seventh, ninth and tenth. The Weather Channel forecast is for a less than 10 percent chance of rain during racing hours in Hallandale Beach, Fla., where Gulfstream is located. 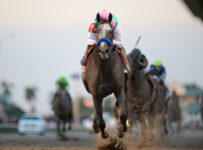