After being dark on Monday and Tuesday, Gulfstream Park will resume racing on Wednesday with ten races and first post at 1:10 p.m.

Later on Wednesday afternoon, Gulfstream will take entries and draw post positions for the $300,000 Fountain of Youth (Grade 2) and the eight other  stakes races it will have this Saturday Feb. 27.

It  is a second round points qualifying points race for the Kentucky Derby (Grade 1 ) on  March 1 at Churchill Downs in Louisville, Ky.  The first through fourth finishers will receive 50, 20, 10 and  5 points.

There are 35 nominations for the Fountain of Youth. Prospects are strong that it could have a  maximum field of twelve, considering the large purse and the need of  trainers and owners to gain points for spots in the Kentucky Derby.

Greatest Honour, (photo on home page) Drain the Clock and Fire at Will are the likely favorites.

The Fountain of Youth will be the first Kentucky Derby points race for Drain the Clock and for Fire  at Will, Drain the Clock, trained by Mike Maker, has won four of his five career starts.  His most recent race was the seven-furlong Sawle Stales (Grade 3) at Gulfstream on Jan. 30.

He led at every call and, even though he was eased up in deep  stretch by jockey Edgard Zayas, he won  by 6 1/4 lengths over King’s Ovation.

Drain the Clock’s only loss came when he did not finish in the Jean Lafite Stakes on Nov. 30 at Delta Downs in Vinton, La.

Hiliberto Figueroa. a Louisiana-based jockey riding Drain the Clock for the first and probably the only time, lost one of  his stirrup irons early in the  race and pulled the horse up.

Fire at Will has not raced since Nov. 7, when he won the Breeders’ Cup Juvenile Turf  (Grade 1 ) at Keeneland in Lexington, Ky. 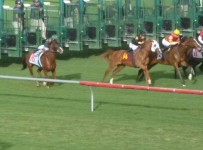