Tampa Bay Downs on Friday will have a nine-race card, with first post at 12:42 p.m.

The co-featured fifth and sixth races are a pair of allowance/optional claiming races with $26,500 purses and $75,000 optional tags.

The fifth race is five furlongs on turf for fillies and mares 4-YO and up. Scheduled post is 2:44 p.m.

It is the RadioStPete-HorseRacingFLA race of the day.

Internet station RadioStPete will carry track announcer Richard Grunder’s live call. Bob Bauer, HRFLA handicapper and associate editor, will be on the air at 2:42 with a preview  and he will have post-race analysis.

We will publish his analysis later in the morning, and will take into account any scratches and other changes.

The race has eight entrants.

The sixth race is six furlongs on dirt for 4-YO and up.

Among the seven entrants is the late-running stakes veteran Lasting Legacy.

Three other contenders have histories of early speed. They are Edgemont Road, Zenden and My Boy Lenny.

We will take a closer look at the sixth race early  on Friday afternoon.

Camacho heads into it with 34 wins, putting him one in front of Samy Camacho in the jockey standings. Daniel Centeno is third with 20  victories.

Defending champion Bennett leads the trainer standings with 20 wins. Jose Delgado is a  surprising second with 17 wins and Jon Arnett is third with 13.

*Tampa Bay will have three stakes races on Saturday as part of its annual Skyway  Festival Day.

RadioStPete will carry Grunder’s live calls of all three stakes, with Bauer’s pre-race and post-race comments. 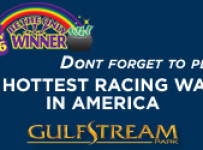 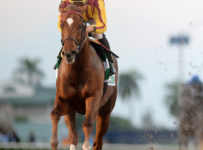