Gulfstream Park will have a new Rainbow 6 pool when it resumes racing on Wednesday.

On Sunday, Gulfstream had a mandatory payout of its Rainbow 6 jackpot. For Wednesday, Gulfstream is guaranteeing that the jackpot pool will be at least $100,000 if there is just one ticket with all six winning horses.

The $1 minimum bet requires picking the first five finishers in correct order, with no consolation payoffs  such as four out of five spots. There were no winning Super Hi-5 tickets in Sunday’s 11th and final race.

Wednesday’s first race is a $20,000 maiden claiming race with five furlongs on turf for 3-year-olds. There are twelve entrants–the maximum field size.

That is the kind of race that often will have long shots in the first five, and thus continue the carryover.

So we also suggest some day-ahead handicapping on the second race.  It is a $20,000 maiden claiming race at six furlongs on dirt for 3-year-old fillies.

This link to the Equibase Web site has the Gulfstream entries for Wednesday.  It has click-ons for handicapping material. Some is free. Some, including Past Performances, is at cost.

On Sunday, its most  recent race day, Gulfstream  had a mandatory payout on its Rainbow 6. Each ticket with all six winning horses won $12,558.86 on a 20 cent bet.

There were 150 of those winning tickets, according to HorseRacingFLA’s review of Equibase charts.

Gulfstream divided 80 percent of the day’s bet (20 percent takeout) and the entire carryover among the tickets with six winners.

On days without a mandatory payout, such as Wednesday, Gulfstream pays out the jackpot only on days when there is just one ticket with all six winners.

When there are multiple winning tickets, Gulfstream takes out 20 percent of the day’s Rainbow 6 bet and then divides 56 percent among tickets with six winners and adds 24 percent to the carryover. 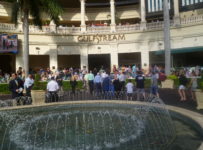