HRFLA Staff Report — Gulfstream Park will be in the national spotlight  Saturday, when it holds the annual Claiming Crown stakes program.

On Friday, the Hallandale Beach, Fla., track will begin the first weekend of its championship meet with a ten-race card.

The race is five furlongs on turf–a $19,000 maiden claimer for 2-YOs. There are twelve entrants. That is the kind of race with potential of no tickets with the first five places in exact order, and that would extend the “no consolation payoffs” bet into the second race.

The Rainbow 6 has a carryover of $51,476. The 20 cents per combination-only bet is on races five through ten, with the sequence scheduled to begin at 2:36 p.m.

PLEASE NOTE–Gulfstream is now making efforts that its races will start at or very close to listed post times. That change was first reported earlier today by BloodHorse.

For several years, Gulfstream has been well known for starting races several minutes past listed posts–largely to bettors extra time especially on multi-race exotic-bets. On some days, the race card was extended by ten minutes or more. That caused confusion among bettors–especially some novices. It also hampered racetracks’ efforts to prevent races from going off  within seconds of each other.

The Claiming Crown has nine stakes races–all restricted to horses that have raced at least once, during their career or in some races at least once since Jan. 1, 2019.

We will have previews on Friday evening and coverage on Saturday 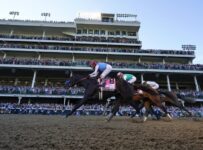