Edgard Zayas wrapped up the riding title at the Gulfstream Park West meet on Saturday, riding three winners on the closing-day program.

Saturday also was the final racing day in the 50-year history of Calder, in Miami Gardens, Fla.
Gulfstream Park has held the GP West at Calder  each October-November since 2014.
But Calder and its parent Churchill Downs Inc. are not renewing the lease under which Gulfstream has held those race meets.
Calder instead will use its jai-alai fronton as its qualifying pari-mutuel sport to retain eligibility for its casino. 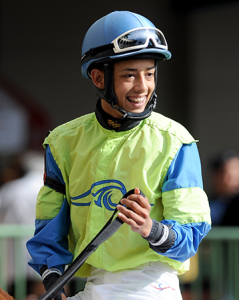 “It’s a special one at Gulfstream Park West, especially since it’s the last one and at the track where I started in 2012,” Zayas said. “It’s one I was looking forward to winning, to be honest.”His ride aboard the ultra-talented I Get It ($5) in the Race 3 feature placed an exclamation mark on the 27-year-old’s most recent title success.

The Ron Spatz-trained daughter of Get Stormy surged from well off the pace at the top of the stretch to score going away by three lengths in the 1 1/16-mile optional claiming allowance for 2-year-old fillies on turf.

It was the third consecutive open-lengths victory for I Get It, who defeated colts by 3 ¾ lengths at Gulfstream Park West Oct. 18 after rolling to a five-length maiden score at Gulfstream Park Aug. 28.Crichton captured his first GP West training title, edging defending champion Saffie Joseph Jr., 19-17.A longtime owner in Jamaica, Crichton, who has been training in the U.S. since 2013, also won the owner’s title with six winners.
Gulfstream Championship MeetGulfstream Park in Hallandale Beach, Fla., will open its 2020-2021 Championship Meet this Wednesday Dec. 2.

It will have ten races with first post of 12:35 p.m.
Gulfstream will hold the national annual Claiming Crown on Saturday Dec. 5. That race card will have nine stakes races–all restricted to horses that have raced at or below designated claiming prices at least once in their careers or at least once since Jan. 1, 2019.
Entries for the Saturday races will be out on Wednesday.
Gulfstream’s  championship meet will extend through March 28, with racing primarily on Wednesdays through Sundays.
Tweet Pin It