Five stakes races on the dirt track will be the highlights of Saturday’s nine-race card at the Gulfstream Park West.

All of Saturday’s stakes  have $60,000 purses and are restricted to Florida-breds.

The featured Millions Classic Preview, for 3-YO and up, is at one mile and is headed by Red Crescent and Noble Drama, the one-two finisher in the race last year, when it was run at 11/16 miles.

It is the fourth race with scheduled post of 2:03 p.m.

There is a guarantee that the Rainbow 6 pool will be at least $175,000 if there is just one ticket with all six winners on the 20 cents per combination-only bet.

Four were scheduled for turf. Gulfstream has moved two of  them to Saturday Nov. 21 and two to Sunday Nov.22. Details are in a story we published on Friday morning.

Gulfstream  made that switch to increase the chances that those races can be run on the turf.

Friday was the fourth straight race day and 23rd day in the GP West schedule, now 29 days old, on which at least one scheduled-for-turf race has been moved to dirt because of rain or lingering wet conditions.

The third and ninth-races on this Saturday’s card are scheduled for turf.

The Weather Channel is for just a 20 percent chance of rain during racing hours.

On Friday, the track was listed as Wet Fast. In the nine races, all on dirt, only one winner was farther back than third after a half mile.

Fourth  Race: Millions Classic Preview, one mile, 3-YO and up, scheduled post 2:03 p.m.Noble Drama, a multiple-early $600,000 in career earnings has been installed as the even-money favorite.

The David Fawkes trainee will seek his third-straight stakes victory.
Noble Drama, a 6-year-old gelding, won the one-mile Wildcat Heir at Gulfstream on Sept. 26 and  the seven furlong Benny The Bull at Gulfstream in his two most recent starts.
Garter and Tie, a multiple-stakes winner who finished second in the Wildcat Heir, is back for Saturday’s race.
Red Crescent beat Noble Drama in last year’s Millions Classic Preview. Since then he has raced six times, all in stakes and handicaps. In that stretch she has no wins but has a second place and two  third place finishes.
The Millions Preview is as a prep for the $100,000 Sunshine Millions Classic. which will be 1 1/16 miles on dirt at Gulfstream on Jan.16. 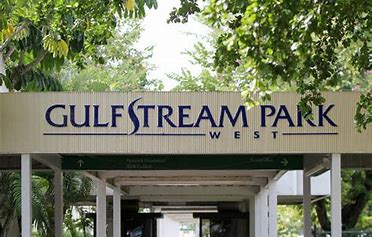 *Fifth race: Juvenile Fillies Sprint, 6 1/2 furgs, 2-YO, scheduled post 2:33 p.m.
Carlos David-trained Shea D Summer was installed as the 9-5 favorite off an impressive debut victory at Gulfstream Park West Oct. 7.
Royal Habibi and Briella are among challengers in the six-horse field.
Sixth race: Millions Sprint Preview, 6 furlongs, 3-YO and up; scheduled post 3:05 p.m.
Shivaree, the 2020 Florida Derby (G1) runner-up, is ready to make his first start since finishing off the board in the Aug. 7 Travers Stakes (G1) at Saratoga.
The Ralph Nicks trainee is 1-for-1 at Gulfstream Park West, where he broke his maiden by nearly 10 lengths nearly a year ago.
With Verve and As Seen on Tv loom as top threats to Shivaree
Larry Bates-trained With Verve defeated Shivaree by a neck while winning the Hutcheson at Gulfstream in February.
Kelly Breen-trained As Seen On Tv, who finished third in the Fountain of Youth (G2) at Gulfstream in February, returns to Gulfstream Park West, where he won the Juvenile Sprint last year.
Seventh race: Juv enile Sprint, 6 1/2, furlongs, @-YOReal Talk, a sharp debut winner at Gulfstream, has been installed as the 2-1 morning-line favorite.

Nicks-trained Real Talk romped by six lengths in his Sept. 6 debut despite running into traffic in the stretch. Michael Yates-trained Poppy’s Pride will seek his third-straight win after capturing the off-the-turn Armed Forces Stakes last time out.*Eighth Race: Distaff, 7 furlongs, F&M 3-YO and up

Peter Walder-trained Cory Gal, a six-length optional claiming allowance winner last time out, has been installed as the 2-1 morning-line favorite.

Cory Gal was claimed by Walder and Paradise Farms Corp. for $25,000 out of a victory in her previous start.
Saffie Joseph Jr.-trained Sound Machine, an open-stakes winner, is scheduled to make her first start at Gulfstream Park West after finishing third in the Miss Preakness (G3) at Pimlico in her most recent start.
Terri Pompay-trained Heiressall, who finished second in last year’s Millions Distaff Preview, enters this year’s running off a victory in the seven-furlong Sheer Drama on Sept. 6 at Gulfstream.
Photo on home page by Barry Unterbrink, HorseRacingFLA
Tweet Pin It