Home
Gulfstream
Because of the past week’s wet weather, most notably Tropical Storm Eta, the Gulfstream Park West meet has postponed the four turf stakes races  that it had scheduled for this Saturday Nov. 14.
Two of those races have been rescheduled for Saturday Nov. 21, and two have been rescheduled for Sunday Nov. 22.  They will be run at Calder Race Course in Miami Gardens, Fla.
Those four races were originally scheduled to be among nine stakes on the Nov. 14 Millions Preview card.
Five dirt stakes will be run as scheduled this Saturday.  All nine stakes have $60,000 purses and are restricted to Florida-breds.
Meet  sponsor  Gulfstream Park is calling the program the Millions Preview because four of the races (with Preview in their name) are similar  in gender, age, surface and distance to stakes with bigger purses that will be run Jan. 16 on the Sunshine Millions card at Gulfstream Park in Hallandale Beach, Fla.
The turf stakes rescheduled for Nov. 21 are:
*Millions Turf Preview for 3-year-olds and up at 1 1/16 miles
*Juvenile Fillies Turf at one mile for 2-YOs
The stakes rescheduled for Nov. 2 are:
*Filly & Mare Turf Preview, 7 1/2 furlogs, F&M 3-YO and up
*Juvenile Turf, one mile, 2-YOs
The five stakes races on Saturday are:|
*Fourth race –Millions Classic Preview, one mile,3-YO and up
*Fifth race — Juvenile Fillies Sprint, 2-YO, 6 1 /2
furlongs
*Sixth race – Millions Sprint, 6 furlongs, 3-YO and up
*Seventh race — Juvenile Sprint, 6 1/2 furlongs 2-YO
*Eighth race — Millions Distaff, seven furlongs, F&M, 3-YO and up
First post on Saturday is 12:35 p.m.
Tweet Pin It 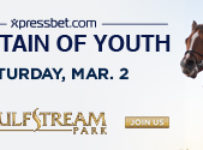