Following overnight rain, the Gulfstream Park  West  meet has moved all five of Saturday’s scheduled-for-turf races to the dirt track, which is listed as Fast.

Those races are the first, third, fifth, seventh and tenth.

Gulfstream is guaranteeing that the Rainbow 6 will have a jackpot pool of at least $250,000 if there is just one ticket with  all six winning horses.

Starting later this morning, we will have track conditions and scratches–followed by coverage during the afternoon. Those reports will be mostly on our blog, which may be accessed on the menu bar at the top  of the home page of this Web site 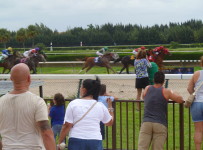 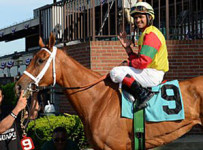