Thoroughbred owner Peter Callahan is having the ride of his racing life this year, and it is coming on the winged-like hooves of his three-year old filly Swiss Skydiver.

The next stop, and possibly the  climactic one, will be this Friday at Churchill Downs in Louisville, Ky. Callahan and seven of his family members will be there to root on Swiss Skydiver in the $1.25 million Kentucky Oaks (Grade 1). She will be one of the favorites along with Gamine, trained by Bob Baffert, in a nine-horse field.

It is shaping up as a classic showdown between Gamine, a lead-at-every-call style horse, and Swiss Skydiver, a horse that has won gate-to-wire and by stalking an early leader.

The Kentucky Oaks is the 12th race on Churchill’s Friday card. Post time is 5:45 p.m. Eastern, with live  coverage on the NBC Sports Network cable channel.

Swiss Skydiver, trained by Ken McPeek, comes into the 1 1/8 mile Oaks with wins in four straight graded stakes for fillies this year.

The first was on March 28 in the 1 1/16 mile Gulfstream Park Oaks (Grade 2) at Gulfstream in Hallandale Beach, Fla.

The daughter of Daredevil also finished second in the Blue Grass(Grade 2) at Keeneland in Lexington Ky., as the only filly in a 13-horse field.

The only drawback for Callahan is that due to COVID-19 restrictions he was only able to attend  one of Swiss Skydiver’s races.

That was the 1 1/4  mile Alabama at Saratoga on Aug,15. Swiss Skydiver won by 3 1/2 lengths over Bonny South, who is not in the Kentucky Oaks.

Tyler Gaffalione rode Swiss Skydiver in the Alabama and will have the mount again on Friday.

“This (Swiss Skydiver) is the most exciting thing I’ve had in racing,” said Callahan, who has been an owner and breeder since the mid 1990s.

Prior to the Alabama, he watched Swiss Skydiver’s 2020 races on TV or on the Internet.

“It’s great that we’re going, even with all the changes they’ve had to make,” he said.  “I don’t know whether I’ll have this chance again.”

This will be Callahan’s second trip to the Kentucky Oaks, both with McPeek. In 2010, they finished fourth with Beautician.

It will be the ninth Kentucky Oaks for McPeek.  His best finishes have been second with Take Charge Lady in 2002  and with Daddys Lil Darling in 2017.

Callahan, who is 76, is a retired publishing industry executive who lives in Palm Beach Gardens Fla.

From 1989 through 1999 he was the chairman, CEO and principal shareholder of American Media. That company’s holdings included the National Enquirer.

Owners are not in part of the spectators ban.  But their accommodations at the track have been scaled down.

Callahan and other owners of Oaks horses will have tables for eight in one of the luxury suites.

Callahan will have seven family members with him.

“The original Swiss Skydiver will be there,” he said.

That is his granddaughter Callie Rasnake.

Late in the fall of 2018, he was looking for a name for a filly that he spent $35,000 to buy with McPeek’s guidance at the Keeneland September sale.

He wanted a name that connected to her sire Daredevil.

He found it in a Sunday morning text message with a photo from Rasnake, a college student who was spending a semester in Europe.

The text said “here I am skydiving in the Swiss Alps.”
It took just seconds for Callahan to decide “That’s the name – Swiss Skydiver.”
Callahan told McPeek to go as high as $40,000 to buy a horse at the Keeneland sale.
Buyers’ interest in the horse that would be named Swiss Skydiver was relatively low because Daredevil was unproven as a sire.
Daredevil won the one-mile Champagne Stakes (Grade 1) for two-year-olds in 2014.  But he was retired early the next year due to injury.
Daredevil’s sire is the multiple graded stakes winner More Than Ready.
Expo Gold, the dam of Daredevil, raced five times but never in a stakes. She is a daughter of multiple graded stakes winner Johannesburg.
From the start. McPeek felt the chestnut filly’s conformity and breeding indicated she had potential for two-turn races. Callahan liked the More Than Ready Connection.
Swiss Skydiver comes into the Kentucky Oaks with five wins, two second place finishes, a third and a fifth in nine career starts. Her earnings are $952,980.
McPeek and Callahan had hoped to race Swiss  Skydiver at Saratoga in 2019.  But her career debut was delayed because of ankle problems that did not prove to be major.
She won her debut at six furlongs at Churchill Downs on Nov. 6. She finished second in a one-turn mile at Churchill on Nov. 30. Gaffalione rode her in  both races.
McPeek then began looking  for a two-turn race.
“But everything either didn’t fill, or we couldn’t get her off the Also Eligibles list,” he said.
Swiss Skydiver’s first 2020 race was a fifth place finish in the Gasparilla Stakes at seven furlongs at Tampa Bay Downs.
She stretched out to two turns and began a journey around major U.S. tracks on Feb. 15, when she finished third in the Rachel Alexandra (Grade 2) at 1 1/16 miles at Fair Grounds in New Orleans.
Swiss Skydiver then reeled off wins at 1 1/16 miles in the Gulfstream Park Oaks, the Fantasy (Grade 3) at Oaklawn Park in Hot Springs, Ark., and the Santa Anita Oaks (Grade 2) at Santa Anita.
In the Kentucky Oaks morning line, Gamine is the even-money favorite and Swiss Skydiver is second at 8-5.
Gamine, a daughter of Into Mischief, crossed the finish line first in all four of her races.
One was an optional claiming race at 1 1/16 miles at Oaklawn Park on May 2.
Gamine beat Speech by a neck.  But the Arkansas Racing Commission later disqualified Gamine and moved her down to 11th and last place after it found the presence of lidocaine, a therapeutic drug, beyond permitted race day levels.
Gamine has since led at every call in winning the one mile Acorn (Grade 1) at Belmont Park and the seven-furlong Test (Grade 1) at Saratoga–both in very fast times.
Gamine has post five, which guarantee her a clean trip.
Swiss Skydiver has the rail post, which can lead to a horse getting boxed in on the run to the first turn at Churchill Downs.
But following Tuesday’s draw, McPeek and Callahan said they are not overly concerned because their filly has speed that should allow her and Gaffalione to avoid early trouble.
Speech also has raced against Swiss Skydiver, and came in second by four lengths in the  Santa Anita Oaks on June 6.
Speech later won the 1 1/16 mile  Ashland (Grade 1)  at Keeneland.
Javier Casttellano will ride Speech for trainer Michael McCarthy, and likely will be making a  late run.
Donna Veloce, Dream Marie, and Shedaresthedevil (another daughter of Daredevil) also have good shots to hit the trifecta.
Tiz the Law will be the heavy favorite in Saturday’s $3 million Kentucky Derby.
His 2020 wins include the Florida Derby (Grade 1) and  the Belmont Stakes (Grade 1), which was the first race in this year’s reconstructed Triple Crowbn series.
Some racing fans are already buzzing about the prospect of a Preakness on Oct. 3 that would have Tiz the Law going for the Triple Crown–with Swiss Skydiver and Gamine among his opponents.
That would be a tantalizing finish  to a Triple Crown season that, like almost everything in this world, has been turned topsy-turvy by the coronavirus.
But first comes the weekend that is always tops for fan interest and offers the most-coveted prizes for three-year-olds.

In his song Run for the Roses. the late Dan Fogelberg called the Kentucky Derby “the chance of a lifetime in a lifetime of chance.”

This year, for Callahan, the same can be said of the Kentucky Oaks. 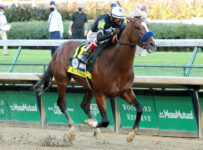