Gulfstream Park is dark this Tuesday and Wednesday.

The Hallandale Beach, Fla., track will resume racing on Thursday with a nine-race card and first first post of 12:00 p.m.

It is a $16,000 maiden claimer with a $21,000 purse at five furlongs on dirt for two-year-olds. There  are there are 13 entrants, including three also eligibles.

Gulfstream is guaranteeing that Thursday’s Rainbow 6 jackpot pool will be at least $350,000 if there is just one ticket with all six winning horses. Such a ticket would take down the jackpot of the full carryover plus 80 percent of the day’s new Rainbow 6 bet.

On Thursday the 20 cents per combination-only bet will be on races four to nine, with the sequence scheduled to start at 1:30 p.m.

There were 45 such tickets, according to HorseRacing FLA’s review of Equibase charts.

There were 53 runners in the six races.

Of that, Gulfstream took out 20 percent. It then divided 56 percent among tickets with six winners and added 24 percent to the carryover.

Gulfstream remains closed to spectators due to the COVID-19 pandemic.

Bets on Gulfstream races may be made via Advance Deposit Wagering (ADW) accounts, and at various sports books, pari-mutuels that are open for simulcasts and at Off-Track Betting offices that are opeen. 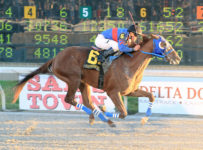