Gulfstream Park will have a carryover of  $745,537 on its Rainbow 6 on Sunday–when it will have a mandatory payout on that bet’s jackpot no matter the number of tickets with all six winning horses.

Because of the size of the carryover and the attraction of the mandatory payout, Gulfstream officials are projecting that the Rainbow 6 will have as much as $5 million in new bets on Sunday.

Gulfstream will have twelve races, with first post of 12:00 p.m.  None of the races are stakes.

Sunday will be closing day  of Gulfstream’s spring/summer meet.  It will also have  mandatory payouts on the Late Pick 5 and in the Super Hi-5.

The Gulfstream Park West meet, at Calder in Miami Gardens, will open on Saturday Oct. 3.  A  Florida law prohibits pari-mutuels from extending any carryovers into a successive meet.

The Sunday Rainbow 6 will be on races seven to twelve with the sequence scheduled to start at 3:22 p.m.

It is a 20 cents per combination-only bet. Multiple horses can be included in each race.

The Rainbow 6 jackpot consists of the entire coming-in carryover plus 80 percent of the day’s new Rainbow 6 bets (20 percent takeout).

Gulfstream usually makes that payout only on days when there is just one ticket with all six winners.

On days without mandatory payouts that have multiple winning tickets, Gulfstream takes out 20 percent of the new Rainbow 6 bet.  It then divides 56 percent among tickets with the most winning horses (usually six) and adds 24 percent to the carryover.

On Sunday, Gulfstream will divide the jackpot among all tickets with the most winners (likely six).

The reason for the relatively large number of winning tickets and the relatively low winning price was that heavy rain began falling before the eighth race (second Rainbow 6 race) and Gulfstream moved the ninth and eleventh races off the turf.

When Gulfstream makes that switch after the start of the Rainbow 6, it gives all live tickets an ALL in the off-turf race. 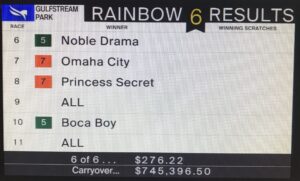 The winning combination on Saturday  was 5-7-7-ALL-5-ALL.

That spoiled Breeze on By’s bid to sweep the three races in the male division of the Florida Sire Stakes series.

On Sunday, we will have a report on all six of Saturday’s stakes races. 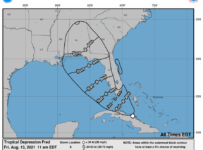