Gulfstream Park will have a special Labor Day program on Monday, with ten races and first post at 12:00 p.m.

Gulfstream has guaranteed that the Rainbow 6 pool will be at least $300,000 if there is just one ticket with all six winning horses. Such a ticket would take down the jackpot of the full carryover plus 80 percent of the day’s new Rainbow 6 bet.

The Monroe will be the fourth race and will feature a rematch of the top three finishers in the 1 1/16 mile Dayatthespa Stakes at Gulfstream on Aug. 9.

Sensible Myth beat Kelsey’s Cross by a neck in that race and Great Sister Diane came in 1 1/2 lengths back in third.

The Mr. Steele will be the eighth race. Sailing Solo, trained by Louie Roussel III, is the 5-2 morning line favorite on the strength of his three-length victory over Harbour Master in the Mecke Stakes on July 25 at Gulfstream.

Sailing Solo led at every call in the Mecke, at one mile on turf. Prado has the return ride on Sailing Solo.

Harbour Master is not entered in the Mr. Steele. Galleon Mast  who finished third in the Mecke, is in the field. Both of those horses are trained by David Fawkes.  Emisael Jaramillo has the return call on Galleon Mast.

Morning Stride also is in the Mr. Steele. On Aug. 16, he won the 1 3/16 mile Richard Henry Lee Stakes at Gulfstream for trainer Monica McGooey. Berrios has the return mount.

Sailing Solo, a 5-year-old son of Smart Strike, is 2-for-2 at Gulfstream. On June 26 at the Hallandale Beach track he came off a four-month layoff to win a 1 1/16 mile turf optional claimer. He led gate-to-wire, ridden by Prado.

HorseRacingFLA’s review of Equibase charts shows there were 130 such tickets.

All six winners, including three favorites, were at odds of 4-1 or lower.

Per its rules on days with multiple winning tickets, Gulfstream took out 20 percent of the day’s bet. It then divided 56 percent among winning tickets and added 24 percent to the carryover. 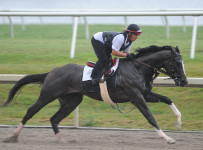 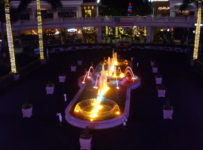