With eight race days left in Gulfstream Park’s spring/summer meet, Edgard Zayas has a 131 to 120 lead over Miguel Vasquez in the competition for jockey wins.

Thursday will be the 100th day of Gulfstream’s 107-day spring/summer meet, which began on April 4 and will end on Sunday Sept. 27.

The Thursday card will  be the start of four straight days of racing at the Hallandale Beach, Fla., track. First post will be 12:00 p.m. each day.

The Weather Channel forecast for Thursday is for just a 15 percent chance of rain during racing hours.

That indicates that the day’s five scheduled-for-turf races will stay on that surface.

Last Thursday through Sunday, Gulfstream moved all scheduled-for turf races to the dirt due to rain and other wet conditions.

Due to the CPVID-19 pandemic, Gulfstream continues to race with  no spectators on site.   Betting on Gulfstream races can be done on almost all major Advance Deposit Wagering (ADW) platforms and at various sports books, other race tracks and OTB offices that are open for simulcasts during the pandemic.

The only stakes races for the remainder of the meet will be on Saturday Sept. 26–with seven stakes listed on that race card.

The co-features are the final two legs in this year’s Florida Sire Stakes (FSS) for 2-year-olds.

Through Sunday, Emisael Jaramillo is third in jockey wins with 108.

The fourth through sixth places are held by: Cristian Torres at 54, Leonel Reyes  at 53 and Hector Berrios at 51.

Zayas and Jaramillo are each scheduled to ride in eight Thursday races. Vasquez is scheduled for five Thursday mounts.

In 2019, Gulfstream held separate spring and summer meets, each for three months.

Zayas finished first in wins at both meets. He had a combined total of 136, followed by Jaramillo with 109 and Vasquez with 104.

Joseph is in first place with 56 wins through Sunday.

Mike Maker is second with 43 victories. Others in the top five are: Antonio Sano, 39; Todd Pletcher 32; and Ralph Nicks 29.

Stonehedge is in first place with 22 victories through Sunday.

Arindel and Frank Carl Calabrese are tied for second  with 18 wins.

Arindel, whose farm is in Ocala, is owned by Alan Cohen, a former managing partner of the Florida Panthers.

For Gulfstream’s combined 2019 spring/summer meets, Mike Naploi was first in owner wins with 28 and Arindel was second with 27.

Napoli is a former Major League Baseball player, mostly at first base and catcher and as a DH.  He hit 267 career home runs while playing for the Texas Rangers, Cleveland Indians, Los Angeles Angels and Boston Red Sox.

Napoli-trained horses have raced only three times this spring/summer at Gulfstream–with no victories.  He is racing primarily at tracks in northeastern states.

Breeze On By, owned by Stonehedge, won the first two races in this year’s male division of the FSS.

Breeze on By, unbeaten in three starts, is scheduled to run and seek a sweep in the In Reality. Nicks trains and Jaramillo is the regular rider of the gelded son of Cajun Breeze.

Both horses are expected back for the My Dear Girl.

Daniel Pita is the owner and trainer of Princess Secret, with Vasquez as the regular rider.

The FSS’s primary sponsor is the Florida Thoroughbred Breeders’ and Owners’ Association, in conjunction with the Florida Horsemen’s Benevolent and Protective Association.

The series is restricted to sons and daughters of Florida-registered stallions–with several requirements.

Owners of competing horses and owners of their sires must nominate them for the FSS and pay a series of fees that become part of the purses and of breeders and owners awards for FSS races. 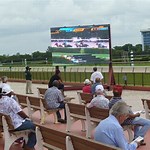 This is the seventh and final year in which Gulfstream is scheduled to hold that two-month meet under a lease agreement. Gulfstream has racing at its Hallandale Beach track during the other ten months each year.

We will soon begin articles that will preview the GP West meet and look at the question of where Gulfstream might hold October-November racing in 2021 and future years.