This is the third day for our new “Gettin’ Out Alive” feature in which we handicap the day’s last race at Gulfstream Park.

Our goal is to provide some added advice on a race that usually is a claimer with a large and hard to fathom field.

If you have been knocked out of the Rainbow 6 and/or Late Pick, hitting the exacta or better on the last race can give your ego and wallet a lift.

Cuy (10) has finished fourth or better in three GP turf races at one mile, in-12 horse fields, and could have some staying power. Ron Allen Jr. rides for trainer/owner Elizabeth Dobles, who must always be considered in these nightcap races.

Anima d’Or (2) has a pair of third place finishes at five furlongs on turf at GP and was gaining near the end.

Alejandro’s Team (1) has finished no better than seventh, in one mile turf races with big fields. He is taking a big drop and could be the early speed if Emisael Jaramillo can get him  a clean break from the rail.

Imperial Greatness (9) hit the board twice last spring in dirt sprints at Tampa Bay and might have some late run.

We had $5 to win on favored Rocket Blast, who won and we also had him in an exacta box and on top of a tri part wheel.

On Saturday our recommended bets totaled $21, and our return was zero.

In Honor of Artie, our pick to win, did not hit the board and we did not have the winner Kramden in our exacta box.

We have staked ourselves with a mythical bankroll of $500 through the end of the Gulfstream spring/summer meet that will end on Sept. 27.\ 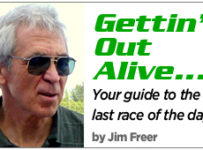