His victories included Tatweej in the day’s feature tenth race (details below).

Vasquez is in second place with 100 victories, and Jaramillo is third with 96.

On Sunday, Jaramillo will finish a four-day suspension for what stewards found to be a recent riding infraction.

Conditions are listed as Fast and Firm.

Gulfstream will be dark this Monday through Wednesday.

It will resume racing Thursday with nine races and first post of 12:00 p.m.

The 20 cents per combination-only bet is on races five to ten, with the sequence scheduled to start at 2:02 p.m.

The Weather Channel forecast is for the  chance of rain to increase from 15 percent to 40 percent  during racing hours.

There are ten entrants, including Alurstra and Il Faraone entered for main track only.

On turf, Battle of Blenheim and Over the Channel are likely  favorites. Each has two wins on the Gulfstream turf this year.

Battle of Blenheim, in the one hole, likely will set the pace.  Zayas will ride for David Braddy.

Over the Channel, from post eight, should b gaining late. Vasquez will ride for David Fawkes.

Tatweej has raced three times, all at Gulfstream, with two wins and a third place finish.

Tatweej was bought for $2.5 million by Alshareef Hazzaa Shaker Alabdali at the 2017 Keeneland September Sale. 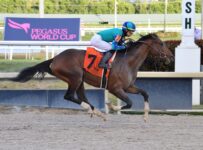 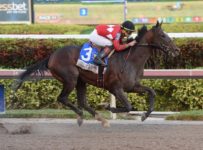