Heading into Thursday’s card, Edgard Zayas holds a 93-92 lead over Emisael Jaramillo in the competition for most jockey wins in the spring/summer meet at Gulfstream Park in Hallandale Beach, Fla.

Data from Equibase also show that Miguel Angel Vasquez is third with 84 victories.

He  is followed by Luis Saez with 49, Irad Ortiz Jr. with 41 and Cristian Torres with 40. Saez and Ortiz rode their winners in April and May, before leaving Gulfstream to  ride at Belmont Park and later at Saratoga.

Thursday will be the 79th day of the 107-day Gulfstream spring/summer meet, which  began April 4 and is scheduled to end Sept. 27.

From 2015 through  2019, Gulfstream held separate three-month spring and summer meets.  Zayas and Jaramillo were among the leaders in wins each year.

In last year’s combined spring/summer meets, Zayas led in wins with 136 and Jaramillo was second with 109.

Through last Sunday, Zayas has 93 victories in 536  spring/summer meet mounts.  That is a 17 percent win percentage, and he has finished third or better in 44 percent of his races.

Jaramillo has 92 wins in 564 mounts. That is a 16  percent win percentage, and he has finished third or better in 44 percent of his races.

At Gulfstream, Zayas is scheduled to ride in five races on Thursday and in seven on Friday. Jaramillo is listed to ride in six races each of those days. 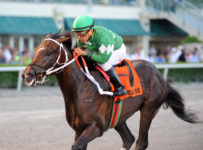