After a rainy weekend, Gulfstream Park is dark this Monday through Wednesday.

The Hallandale Beach, Fla., track will resume racing on Thursday. with ten races and first post of 12:00 p.m.  It will be the start of four straight days of racing, each with a 12:00 p.m. first post.

The number of winning tickets was low largely because Charge Account, at 40-1, won the seventh race.

Bettors added $307,426 to the Rainbow 6. After the 20 percent takeout, Gulfstream divided 56 percent of the day’s bet among tickets with six winners and added 24 percent to the carryover.

Gulfstream is guaranteeing that Thursday’s Rainbow 6 jackpot pool will be at least $1.35 million if there is just one ticket with all six winners.

If the combination of the carryover and the day’s new Rainbow 6 bet  is less than $1.35  million, Gulfstream will make up the difference.

The jackpot consists of 80 percent of the day’s new Rainbow 6 bet plus the entire carryover.

On this coming Sunday Aug. 9, Gulfstream will have a mandatory payout on the Rainbow 6-regardless of the number of tickets with all six winners.

If the jackpot is not hit on Thursday, Friday or Saturday, it is likely that the carryover for Sunday will  be in the $1.3 million range.  In that situation, Gulfstream wagering history indicates that $5 million or more will be bet on the Rainbow 6 on Sunday.

Gulfstream had planned to have a mandatory Rainbow 6 payoff this past Sunday Aug. 2.  It postponed that payoff due to concerns that Tropical Storm Isaias might have a major impact on southeast Florida.

Isaias produced rain and sloppy/off-the-turf conditions at Gulfstream, even though it did not make a landfall in Florida.

Later on Tuesday, we will review the past weekend’s racing at Gulfstream and preview the upcoming week. 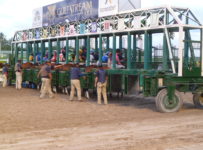