Gulfstream Park on Saturday will have a mandatory payoff on its Rainbow 6, with money that has a carryover of $349,328.

First post will be 12:00 p.m. for a 12-race card. There will be four stakes races, including the second legs in the annual Florida Sire Stakes series for 2-year-olds.

The Rainbow 6 is a 20 cents per combination-only bet, with multiple horses permitted in each race.

On Saturday it will be on races seven to twelve, with the sequence scheduled to start at 3:05 p.m.

Gulfstream officials are estimating that the Rainbow 6 pool will be about $2 million.

The mandatory payout will consist of the entire coming-in carryover plus 80 percent of the Saturday’s Rainbow 6 bets (20 percent takeout).

Gulfstream will pay it all out regardless of the number of tickets with all six winning horses.

On non-mandatory days, Gulfstream makes that jackpot payoff only when there is just one ticket with all six winners.

On such days when there are multiple tickets with all six winners, Gulfstream takes out 20 percent and then divides 56 percent among the winning tickets.

The carryover has built up over the last eleven race days, on which there has not been a day with a stand-alone winning ticket.

That was preceded by a mandatory payout on Aug. 9.

Program numbers of the winning horses were 2-2-2-4-4-4. Three winners were favorites, and the highest odds on a winner were 10-1.

The Proud Man, a mile turf race, will be contested by nine juveniles, including Boca Boy, who finished third in the $100,000 Dr. Fager, the first leg of the Florida Sire Stakes series Aug. 1.

The Sharp Susan, a mile turf race for 2-year-old fillies, attracted Spanish Loveaffair, who captured her July 23 debut by 11 lengths for trainer Mark Casse.Breeze On By, who captured the six-furlong Dr. Fager, returns in the seven-furlong Affirmed, in which the Ralph Nicks trainee will again clash with Dr. Fager runner-up Gatsby.Go Jo Jo Go, a late-closing winner of the $100,000 FSS Desert Vixen, will headline the seven-furlong Susan’s Girl, in which Desert Vixen runner-up Princess Secret will seek revenge on the Michael Yates trainee.
The Dr. Fager and Desert Vixen were run on a rainy day with the track listed as Sloppy.
The Weather Channel forecast for today is for a rain chance growing from 15 percent to 35 percent during racing hours.Breeze On By and Go Jo Jo Go are both owned by Gilbert Campbell’s Stonehedge LLC, winner of 14 Florida Sire Stakes series races.
The FSS is restricted to horses whose sires are Florida-registered stallions whose owners have nominated those horses for the series. Owners of nominated 2-YOs and of  nominated stallions pay a series of fees that are included in purses and in breeders and owners awards.
Tweet Pin It 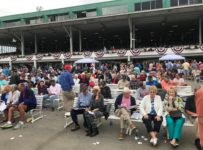