The carryover on the Gulfstream Park Rainbow 6 is 20 race days old and has passed $1 million.

The Friday card will be followed by a Saturday card with two turf stakes races and a Sunday card with one turf stakes and a mandatory payout on the Rainbow 6  jackpot/carryover–no matter the number of tickets with all six winners.

Gulfstream has guaranteed that the Rainbow 6 pool will be at least $1.4 million if there is just one ticket that has all six winners and thus takes down the carryover.

Bettors wagered $170,496 on the Rainbow 6.  Per its rules on days with multiple wining tickets Gulfstream took out 20 percent of that bet, divided 56 percent among tickets with six winners and added 24 percent to the carryover.

*On Saturday, Gulfstream will have twelve races ab and first post of 12:00 p.m. 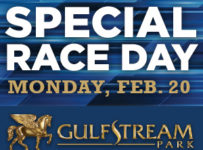