Gulfstream Park plans a 10 race card Saturday, with first post of 12:00 Noon. The weather looks more favorable today, as just a 10-15% chance of rain is forecast during racing hours.

Race 5 is the run that starts the Rainbow 6 wager, which is planned for a 2:10 PM post time.

In Friday’s racing action, some huge payouts were recorded, with just one real long-shot in the late 6 races.

The highest odds win was Lahinch at 20:1 in race 8, which dwindled down the bettors considerably in the multi-race wagers for that nice win.

Check your racing program on-line for late scratches, as the weather can turn quickly, and off-turf races have been the norm for the past week or so of races. 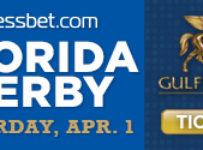