Starting this week, Gulfstream Park is adding Wednesdays and removing Thursdays from its live racing schedule.

Gulfstream will continue to have races on Fridays, Saturdays and Sundays.

According to its Web site https://www.gulfstreampark.com/ Gulfstream will have racing on Wednesdays and then Friday through Sundays in June and July.

That schedule shows the Hallandale Beach, Fla., track holding races on Thursdays through Sundays in August and September.

Gulfstream  is scheduled to hold its annual 40-day Gulfstream Park West meet at Calder in October and November.

*As  it has each live race day since March 13, Gulfstream this Wednesday will have racing with no spectators  and thus no on-site betting.

All of Gulfstream’s races may be viewed live on its Web site.

* This Wednesday, Gulfstream will have ten races with first post of 12:00 p.m.

The Rainbow 6 carryover has grown because Gulfstream has gone 14 straight race days without the jackpot payoff requirement of just one ticket with all six Rainbow 6 winners.

The jackpot consists of 80 percent of the day’s Rainbow 6 bets (20 percent takeout) and the entire coming-in carryover.

On days with multiple winning tickets, Gulfstream takes out 20 percent of the day’s new Rainbow 6 bets and then divides 56 percent among tickets with all six winners and adds 24 percent to the carryover.

For this Wednesday, Gulfstream is guaranteeing that the Rainbow 6 pool on Wednesday will be at least $1.95 million if there is just one ticket with all six winners.

In that case, Gulfstream would add money to the pool if the combination of the carryover and new bets is less than $1.95 million. 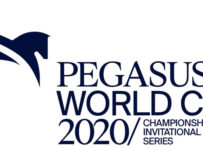