Tampa Bay Downs is underway with its  eight-race Wednesday card, and conditions are listed as Fast and Firm.

The only carryover is $51,635–on the Pick 6. The 20-cents per combination only bet is on races three to eight with  the sequence scheduled to start at 1:30 p.m.

Tampa Bay is again racing with no spectators, and thus no betting on-track as it attempts to comply with government gidances on limiting the number of people at public events.

Most of the  other racetracks and the Off Track Betting locations that carry Tampa Bays simulcast signal are closed.

Three year- olds and up will sprint seven panels in Wednesday’s  Race 7, under $16,000 NW2L Claiming conditions. Post time is scheduled for 3:30 PM.

Midwestern shipper DEVIL’S RULE (7) appears to have a class edge on his rivals, as he competes in the Claiming ranks for the first time. This four year-old gelding comes off a 124 day hiatus and has been training in Ocala since January. His last pair of speed figures earned at Hawthorne and Indiana Downs would win here. Has ran well fresh in the past. Mike Allen rides for trainer Robert Dobbs Jr. 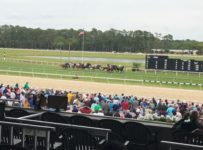