Conditions are listed as Fast and Firm for Thursday’s ten-race  card at  Gulfstream Park.

The 20-cents per combination only bet is on races five through ten, with the sequence scheduled to start at 3:03  p.m.

Gulfstream has guaranteed that the Rainbow 6  ;pool will be at least $400,000. That is the combination of the coming-in carryover and all of the day’s new bets on the Rainbow 6.

Bettors added $214,228  to the Rainbow 6.  Of that,  Gulfstream  took out 20 percent  It then divided 56 percent among tickets with six winners and added 24 percent to the carryover. 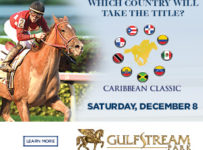