Gulfstream Park on Saturday will have five stakes races, all for newly turned 3-year-olds, and a Rainbow 6  bet on which the track’s management  has guaranteed that the pool will be at least $2 million.

The Rainbow 6, a 20-cents per combination only bet, will be on races six through eleven with the sequence scheduled to start at 2:30 p.m.

Conditions are listed as Fast and Firm.

The stakes races, scheduled to begin at 2:30 p.m. with 30-minute intervals, are:

The Mucho Macho Man has seven entrants. Chance It, As Seen on Tv and South Bend are likely favorites.

It is the first of Gulfstream’s prep races for the Florida Derby (Grade 1) on March 28. 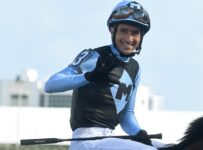