Home
Gulfstream
NOTE–The report below is a  Gulfstream Park press release, issued Sunday.  This week, HorseRacingFLA will have  articles with additional  details about Gulfstream handle–as well as information about Gulfstream field sizes and  wagering on the Rainbow 6. We also will have previews of the Pegasus World Cup
From Gulfstream Park
Gulfstream Park will enter Pegasus World Cup week on a wave of optimism and success.
The fourth running of the Pegasus World Cup Championship Invitational Series presented by Runhappy Saturday will feature many of the best horses in training while showcasing Gulfstream’s modernization and its growing business.
Through the first 18 days of racing in 2020, Gulfstream is up 17 percent from last year, or $24.5 million. This follows a Championship Meet opening from Nov. 29 through Dec. 29 in which handle was up $9.8 million over the previous dates in 2018. Average daily handle for the Championship Meet is approximately $10 million.
Gulfstream also set single-day, weekday and weekend records for total handle in December.
“The Pegasus World Cup continues to attract our sport’s biggest stars, and we believe this year’s races are going to be extremely competitive,” said Vice President of Racing Mike Lakow. “We want to thank our fans and horsemen for supporting our product, and we look forward to more exciting racing this Pegasus week and throughout the remainder of the Championship Meet.”
Gulfstream has undergone a $20 million modernization over the past several months including a new open-air dining terrace on the second floor overlooking the racetrack, a new infield tote board measuring 100 feet by 30 feet with a high-density pixel LED screen, enhanced sound system and additional tables around the walking ring.
.
Tweet Pin It 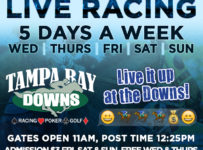