The first race on Wednesday has a carryover of $4,708 on the Super Hi-5.
The carryover on the Rainbow 6 has grown to $543,591. The 20-cent per combination only bet  will be on races  five through  ten.
Gulfstream will continue the week with its  regular  Wednesday trough Sunday schedule of live  racing.
The  week’s only stakes race in Florida will be the  r. Prospector (Grade 3) at Gulfstream on Saturday.  It will  be six furlongs om dirt for  3-year-olds and up.  Entries will be out on Wednesday afternoon.

The only carryover is $1,878 on the Ultimate  Pick 6.  The 20-cent-per-combination only bet will be on races four through nine.

This is the first season for the Tampa Bay Pick  6, with a structure similar to the Gulfstream bet.  As some observers expected, the bet has not gained large early attention from fans  On most days, it has had new bets in the $5,000 to $7,000  range.

Once Tampa’s Pick 6  has some larger carryovers we expect that interest in it will grow–but to nothing close to the level of Gulfstream.

The Hallandale Beach  track pioneered the low denomination bet  on which  the carryover is paid out only if there is just one ticket  with the winners of  all six  races.

Tampa Bay will be dark as usual on Thursday and then have racing on Friday and Saturday as usual.

It will add Sundays to its live schedule this weekend, and have four-day race weeks for the rest of its schedule through May 3.
The  two Florida  tracks will not have live racing on  Wednesday Dec.  5,  which is Christmas day. 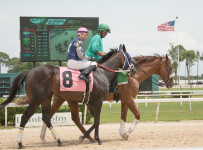