All of the stakes had purses of $75,000 and were restricted to Florida breds.  The GP West meet is conducted by Gulfstream Park and is run at Calder in Miami Gardens.

This story has a list of the stakes winners, below.  Later this weekend, we will have stories with additional details on the stakes races.

In other GP West news from Saturday:

The winning jockeys, trainers and odds are listed below.

Lopez added a fourth win, in the fifth race which was a claimer for fillies and mares 3-YO and up.

Cristian Torres, a five-pound apprentice, leads with 24.  Defending GP West champion Edgard Zayas and Leonel Reyes are tied for third at 22 wins. Emisael Jaramillo is next with 20.

The GP West meet started Oct. 2.  Lopez was not there until mid-October.  Instead, he was at Monmouth Park in Oceanport, N.J., where he led jockeys in wins.  He has won multiple riding titles at Gulfstream and Calder. 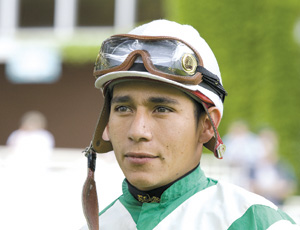 At the current GPW meet, Lopez has his 23 wins in 79 mounts.  His 29 percent winning percentage is the best among the meet’s jockeys who have ten or more wins.

On Sunday, Gulfstream has a nine-race card with first post at 12:50 p.m.

Lopez has seven mounts for the day. Torres, Zayas and Jaramillo are each listed on six mounts.

Reyes suffered a broken arm and broken chin in a spill during the seventh race at GP West  on Nov. 1.  It is expected that he will not be able to ride until late December.

Reyes was unseated when the 3-year-old filly Blue Eyed Beth hit the rail.  She was uninjured.

Camacho has eight wins in 55 starts at the GP West meet.  His achievements include leading  jockeys in wins at the 2018-2019 Tampa Bay Downs meet.

Only one race was won by a horse leading at every call.

That was Travy Boy, at 21-1, in the Millions Sprint Preview (6th race) at six furlongs on dirt with Lopez riding.

Through most of the meet, the dirt surface has been favorable to front runners and horses from mid-pack and closers have won most turf races.

An asterisk indicates that the race was a prep for a stakes race with similar conditions and distance that will be on the Sunshine Millions card at Gulfstream on Jan. 18.