Kantharos’ Image (1) passed Harry’s Ontheloose (2) in deep stretch and went on to win by three-quarters of a length in the 11th and final race at the Gulfstream Park West meet on Saturday.

That result kept the Rainbow 6 carryover alive for a 29th  day (the entire GP West meet thus far).
The carryover will be $691,990 on Sunday.

The GP West meet, run at Calder in Miami

Gardens, will have nine races with first post at 12:50 p.m

The Rainbow 6 will be on races four to nine, with the sequence set to start at 2:22 p.m.

If Harry’s Ontheloose had won yesterday’s 11th race, there would have been just one ticket with all six  winning horses in the the Rainbow 6.  That ticket would have taken down a jackpot of  approximately $800,000.

Instead, the win by Kantharos’ Image left two tickets with six winners.  Both received $65,741.60 on the 20 cents per combination only bet. 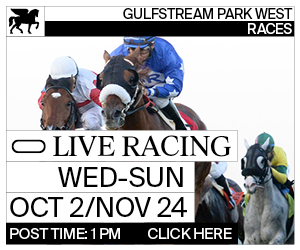 Other Rainbow 6 and wagering notes:
*Bettors added $206,650 to the Rainbow 6–the most on any day in the current cycle. Twenty-four percent of that was added to the carryover.

*Going into the last race there were 16 live tickets on the Rainbow 6.

* Four tickets had a horse singled in the $16,000 optional claiming raee at five furlongs on turf turf for 3-year-old and up.  In addition to Harry’s Ontheloose, the singled horses had program numbers 3, 8  and 10.

Meet sponsor Gulfstream Park pays out the Rainbow 6 jackpot (full carryover plus 80 percent of the day’s new Rainbow 6 bet)  only on days when there is just one ticket with all six winners.

So, once again there was excitement in watching a last race at GP West, even if you were not alive in the Rainbow 6.

Two of those races had longshot winners, and both were part of the Rainbow 6.

Travy Boy (5) , at 21-1, shot out to the lead and went on to win the sixth race–the Millions Sprint Preview.

*Amid intermittent rain, conditions were listed as Fast and Firm throughout the day.

*GP West held its 2018 Millions Preview Day on Saturday Nov. 10.–with eleven races including the same nine stakes as this year.

The Rainbow 6 was hit by  a single winning ticket on the previous day.