There will be  five Breeders’ Cup races at Santa Anita Park on Friday–all for 2-year-olds and with 63 entrants including Also Eligibles.

But only two of those horses have raced in Florida. 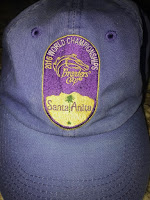 They are coming into the Breeders’ Cup, in Arcadia, Calif., off gate-to-wire victories in stakes races on Sept. 28 at Gulfstream Park in Hallandale Beach, Fla.

Both will be racing away from Gulfstream’s spring-summer meets for the first time, and both will be making their graded stakes debuts.

Thus, in the wagering, they will be dealing with pre-conceived bias from some handicappers.

However, Two Sixty’s stakes-record win in the $400,000 My Dear Girl Stakes was so fast  that she has been  attracting some buzz and could go off in the 10-1 range in a nine-horse field.

Graceful Kitten is unbeaten in three starts, including the Armed Forces Stakes on Sept. 28. But he probably will be among the longest shots in the Juvenile Turf’s full 14-horse field.

It is not unusual for the Breeders’ Cup Juvenile races to have just several  horses that have raced in Flonrida.

A main reason is that many top national trainers, such as Todd Pletcher and Bill Mott, race their top 2-year-olds at tracks in New York and in Kentucky duiring the summer and fall.  In December they bring many of those horses to Florida to race duirng the winter at Gulfstream or at Tampa Bay Downs in Oldsmar.

Finishes in the money, let alone wins,  have been rare for Florida horses in Breeders’  Cup Juvenile races.

A notable exception was in 2010 when Awesome Feather won the Juvenile Fillies at Churchill Downs.

Prior to the Breeders’ Cup, Awesome Feather swept the three-race fillies division of the Florida Sire Stakes, then run at Calder in Miami Gardens. Those races are restricted to Florida-breds who are sons or daughters of Florida-registered stallions whose owners have nominated them for the progrsam.

Awesome Feather was owned by Fred and Jane Brei’s Jacks or Better Farm in Ocala.  She was trained by Stan Gold and ridden by Jeffrey Sanchez.

The five Breeders’ Cup races are part of a ten-race card at Santa Anita. Gulfstream and Tampa Bay Downs will have simulcast wagerig on the full card. The five Brereders’ Cup races will betelevised live on the NBC Sports cable channel.

Gary Barbrer paid that amount for him at the March, 2019 sale at the Ocala Breeders. 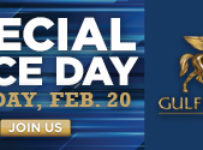