By Jim Freer  and Barry Unterbrink

The Rainbow 6 was hit on just one ticket at Gulfstream Park on Friday — and the holder of that ticket took down a jackpot of $2,211,783 on the 20-cent per combination only bet.

It was the only ticket that had Resident Liberal (5), the winner of the ninth and final race, along with  the winners of the other five Rainbow 6 races.

As of  9:00 p.m. Friday, Gulfstream had not disclosed the identity of the winning bettor or information about the size of the wining waging ticket.

The winning ticket for a single bettor will severely dampen what Gulfstream management had hoped would be a huge betting day in the Rainbow 6 on Sunday.  On that day, Gulfstream will have a mandatory payoff of the entire  carryover — no matter the number of winning tickets.

The  carryover had grown because Gulfstream had gone 46 straight race days without the jackpot/carryover payoff requirement of just one ticket with the winners of all six Rainbow  6  races.

On non-mandatory payoff days when there are multiple winning tickets, Gulfstream takes out 20 percent of the day’s Rainbow 6  bets. Of those bets, it then divides 56 percent among tickets with the most winners (usually 6) and adds  24  percent to the carryover.

This Saturday is  a non-mandatory payoff day for the Rainbow 6.

On Sunday, the last day of the 2019  summer meet, Gulfstream will have eleven races with first post of 1:15  p.m.
The Rainbow 6 will be on races six to eleven with the sequence scheduled to start at 4:00 p.m.

The Gulfstream Park West meet, held at Calder, will open next Wednesday October 2. Gulfstream did not make a special request with Florida gaming regulators to extend any carryovers into that meet. 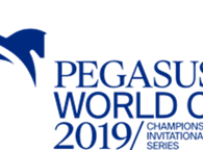