Gulfstream Park has a ten-race card scheduled for Friday with a first post of  2:00 p.m.

The Weather Channel forecast is  for a 35 percent  chance of thunderstorms during racing hours at rhe  Hallandale Beach, Fla.,   track.

The  20-cent per combination only bet will be on  races five through ten with the sequence scheduled  to  start at  3:58 p.m.

It was the 23rd straight race day  without the jackpot payoff requirement of just one ticket with  all six Rainbow  6 winners.

The  jackpot  consists of the entire  carryover plus 80 percent of the days new Rainbow  6 wagers.

On days with multiple winning tickets,, such as Thursday,  Gulfstream takes out  20 percent of the  day’s Rainbow 6 wager.  It then  divides 56 percent among winning tickets  and adds 24  percent to the carryover.

All five  of Thursday’s scheduled-for-turf races were run on that surface.
On seven of this month’s nine race day,s Gulfstream has moved two or more races

from turf to dirt because of raim or lingering wet conditions 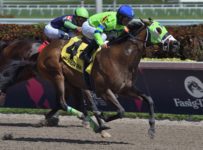