Home
Gulfstream
HorseRacingFLA Staff Report
Gulfstream Park will  have a Rainbow  6  carryover of $845,641  when it resumes  racing on Wednesday.
First post will be 12:35 p.m. for the ten-race card.

The  carryover  has  grown because Sunday, the most  recent race day, was  the 13th  straight race day without the jackpot/carryover  payout  requirement of just one ticket with  the winners  of all  six  Rainbow  6 races.

HorseRacingFLA has been using Equibase charts  to track Gulfstream handle since August  2015.   Our research shows that the current carryover is the fastest in the Rainbow 6 since then.
On Sunday there were seven tickets with all six  winners.  Each received $35,128.54 on the 20 cent  per combination only bet.

Bettors  added $439,160 to the Rainbow  6 pool.  Per its rules on days with multiple winning tickets, Gulfstream took  out  20 percent of  the day’s  bet. It  divided  56  percent among tickets  with six  winners and  added 24 percent to the carryover.

The relatively low  number of winning tickets and relatively high payout was largely due to  Majestic Luna, at 19-1, wining the  eighth race/first leg 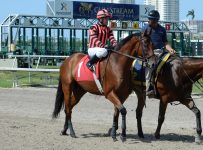