Win Win Win set a Tampa Bay Downs record of 1:20.89 for seven furlongs on dirt with a runaway victory on Saturday in the Pasco Stakes for 3-year-olds.

Win Win Win, at 8-5, finished 7 1/4 lengths ahead of runner-up Overdeliver in the five-horse field. Cave Run, the 7-5 favorite, came in third–three lengths behind Overdeliver.

Win Win Win  broke the track record of 1:21.40.  It was set by Catalina Red in the Pasco in 2014 and equaled by the then 7-year-old El Grande Rojo in an allowance/optional claiming race in 2015.

The Tampa Bay dirt track was listed as Fast, and it also played that way in Saturday’s two other stakes races on the annual Skyway Festival Day.

Numbers above 100 are generally  regarded as very strong, especially  for  3-year-olds and 2-year-olds.

The victory in the Pasco was the third in four career starts for Win Win Win, and his first stakes victory.

Trombetta said “maybe” when asked if he will consider running Win Win Win in the Sam F. Davis Stakes (Grade 3) at Tampa Bay Downs on Feb.9.  That  1 1/16 mile dirt stakes is a point-scoring race for spots in the 1 1/4 mile Kentucky Derby (Grade 1) on May 4 at Churchill Downs in Louisville, Ky.

He broke a step slowly and was in fourth place after a half mile.  The pace was a fast 44 52 seconds, set by  Gladiator King who faded and finished last.

Win Win Win took the lead a quarter-mile from

the finish and coasted home.

He is a son of Hat Trick, out of the Smarty Jones mare Miss Smarty Pants.

Gasparilla Stakes. Molto Bella took the lead after a half mile and went on to beat Into Trouble by 6 1/2 lengths. Another Time finished third in the 10-horse field.

“She broke really good, and she was a little bit aggressive early,” said winning jockey Luca Panici. “I tried to relax her but that didn’t work too well, so I let her go by herself and she responded really well. She is a very nice filly with a lot of class and a good brain.”

Molto Bella improved to 2-for-6, with two seconds. She finished fourth in her previous start, the Grade II Demoiselle (Grade 2) at Aqueduct on Dec. 1.

“Ian said he wanted to go back to one turn today and see where she takes us,” Bloch said. “We may be back for the Suncoast Stakes (on Feb. 9), but we’ll let Ian make the call.”

The Suncoast is one mile and 40 yards on dirt.

Her time bettered the mark set last year by Well Humored, who won the Wayward Lass in 1:43.86 while finishing ¾-length ahead of Tapa Tapa Tapa.

Antonio Gallardo was the winning jockey.

Now 5-for-14 lifetime and 3-for-4 at Tampa Bay Downs, Tapa Tapa Tapa had finished third in her previous start, the Grade III Rampart Stakes at Gulfstream on Dec. 15. She is owned by the Beau Ravine, LLC concern of her breeder, Patricia Pavlish, and husband Ed Pavlish, who are from Cleveland and attended the race.

Hamm said he intends to return Tapa Tapa Tapa to graded-stakes competition, where a victory would increase her value as a broodmare. 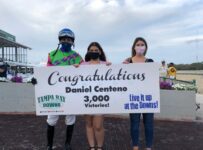