Dalmore finished third, a head behind Jay’s Way, in an eight-horse field in the 1 1/8 mile dirt stakes.  The race was restricted to Florida-breds, 4-years-old and up.

Gulfstream on Saturday had three other Sunshine Millions stakes races, all restricted to Florida breds.

Starship Jubilee was the even-money favorite in the 13-horse field.  She won in 1:43.33, with Castellano riding for trainer Kevin Attard and owner Blue Heaven Farm. 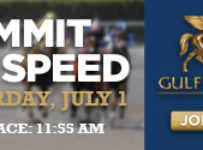