Home
Gulfstream West
There were no tickets with the winners in all six races in the Rainbow 6 at the Gulfstream Park West meet on Wednesday.
So GP West made a non-jackpot payoff to tickets with five  winners. Our research shows there were two such tickets.  Each was paid $19,483.80 on the 20-cent only bet.
The Rainbow 6 carryover grew from $23,830 to  $32,180 for Thursday.
First post will be 12:30 p.m. for Thursday’s nine-race card. The Rainbow 6 will be on races four to  nine with the  sequence scheduled to start at 2:00 p.m.
The Wednesday  Rainbow 6 was on races  five to  ten.
A large number of tickets  were knocked out when 32-1 shot Herecitykitty won the fifth race (first leg).  Odds on the other five winners were 6-1  or  lower.
The winning combination was 8-7-1-8-1-12.
Tweet Pin It 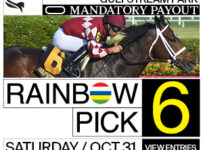