Thunder Snow, Yoshida and Mendelssohn finished third through fifth respectively in the 14-horse field. The race wes 1 1/4 miles on dirt.
Accelerate (photo on home page) won in 2:02.93 on the track listed as fast.  Joel  Rosario rode him for trainer John Sadler and owner Hronis Racing,
Accelerate was the 7-2 favorite.  He came into the BC Classic with a string of three straight wins in Grade 1 stakes at tracks in California.
Gunnevera’s regular training base is Calder (aka Gulfstream Park West) in Miami Gardens, Fla. He is trained by Antonio Sano and owned by Margoth, whose principal Salvador Del Valle is a citizen of Venezuela.
Gunnevera’s post-time odds were 30-1, even though his four-race record in 2018 included an allowance race win and a second place and third place finish in Grade 1 stakes.
Odds on the third to fifth place finishers were 14-1, 14-1 and 13-1, That led to large payoffs, including $130.80 on the $1 exacta of 14-4 and $563.60 on the 50-cent Late Pick 5 and a whopping $171,748.95 on the 50-cent Super Hi 5. The winning order of finish on the race was 14-4-1-10-9.
Tweet Pin It 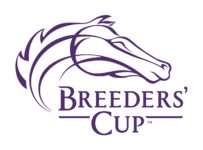 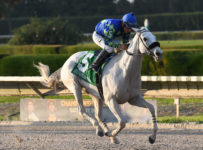